Back when I first started spinning, I saw a sweater that had been hand knitted. It was a yoked pullover sweater with an beautiful stranded pattern in the yoke and was made up of three or four natural colors of fleece. It looked sort of like this. I have always coveted that sweater.

Then, one year at Maryland Sheep and Wool Festival, in the contests someone had entered a gorgeous sweater of just that type -- all handspun.

Then I started raising a few sheep. I started out with two, added a third then lost one. But three was the original goal. If I were to fence my ENTIRE yard, I could easily do five, but I really would be divorced and probably broke as well.

Alice and Jerry have two different colors. Alice is pretty evenly white and grey with a few patches that are darker and a few that are almost pure white. Jerry is white and light brown. As a lamb he was a chestnut color but that faded and he has only a few small chestnut spots left. Both have beautiful fleeces.

But I really wanted a dark colored, non-fading Shetland.

And last year I met Katherine Davidson of Potosi Sheep Farm near Lancaster, PA. We talked about sheep. I talked about wanting a non-fading lamb. She told me she might have one and for a very reasonable price since her daughter was in a town near me, she would be willing to even deliver it. So, we struck a verbal deal. She would bring me a little black wether named Ohno as soon as he was weaned.

I think he weaned in June. That was just about the same time the East Coast began cooking under weeks of drought and 100+ degree temperatures. It was not safe to transport a lamb in the back of a pickup in these conditions so we put it off.

Finally, yesterday, there was a break in the weather. It cooled down to a pseudo comfortable 88 and Ohno began is trip to me in a dog crate in the back of a pickup. 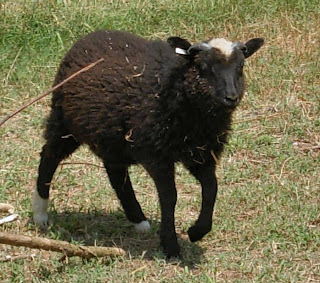 He arrived safely and immediately got an ear tag.

Katherine and family were running late at this point and were supposed to be meeting family halfway across the state in the other direction and not realizing how far East my house really was, were now about 2 1/2 hours late. I paid her, we agreed to exchange the rest of the shot record and information by email later, and off they went.

And Ohno got to meet his new sheep family. As I feared, Alice and Jerry were very rude. I know it is sheep behavior to put the new guy in his place and establish who is dominate to whom in a flock, but when Jerry nearly squashed him by jumping on him, I pulled Jerry out and put him back in the larger pasture. When Alice started beating him up too, I pull her out and left Ohno in the adjoining pasture and let them talk to each other through the fence. Both had food, water and shelter, so I wasn't too worried.

Just before dark, I put Alice back in with Ohno so he would not be alone over night. He was a gentleman, kept his distance, gave her space and she did not bother him over much. They did not sleep together, but seemed okay.

So, this a.m. I put Jerry back in. He immediately started abusing Ohno again. And he is much rougher than Alice. And once he got Ohno down, he would not stop, so I grabbed Ohno up, put him in the big pasture and left Alice and Jerry in the little one for now. I will later put Alice in the big pasture and leave Jerry until later this evening. I may need to figure out a way to provide Ohno with a "safe house" some where he can get into for protection that the others cannot. He is half their size right now. But he would have to figure out quickly not to venture to far from home base. I will have to think on this a bit.

Clearly, they will need supervised play time for a while. I just hope eventually, they will all adjust. I also hope the adjustment is sooner, rather than later.
2 comments: 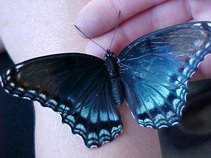